The first in a series of four workshops that will identify and evaluate different scenarios for the re-design of the biological recording infrastructure in Scotland was held on the 18th and 19th September, at Scottish Natural Heritage’s Battleby Conference Centre near Perth.

In this workshop, thirty attendees (including the four organisers) had the principal task of examining different scenarios for a data flow model.  We looked at and evaluated the existing model, along with five other possible models that included different scenarios around each stage of the NBN / SBIF Data Flow Pathway (record & collect; verify; curate; aggregate; analyse and share).

After critically evaluating these models we were invited (in four groups) to co-create our own ideal scenario for each stage of the data flow model.  The provision of scissors and glue, and the invitation to view the stages of the pathway as pieces of a jigsaw that could be shaped and formed as required, resulted in some very creative ‘Blue Peter’ inspired moments.  What we realised is that data flow is actually very integrated, circular, and possibly 3-dimensional!

After the four groups had created their ideal models, each stage of each model was compared to evaluate the effort and value of providing that scenario and we eventually reached a preferred ‘minimum viable model’.  This model describes a simpler, more defined data flow than the current model, while recognising that certain elements such as verification are ongoing and have a circular feedback loop.

Before undertaking the principal task of evaluating models, the workshop attendees were guided through and invited to comment on some of the results of the questionnaire and interviews that had been conducted earlier this year, to look at the drivers for change to the current infrastructure, and to consider and contribute to the design principles for a data flow model.

The outputs from this workshop are still being written up but they will be sent out to all the attendees as soon as they are ready.  They will also be made available on the SBIF Review pages of the NBN website.

Thanks to everyone who attended and participated in the workshop.  Thanks also to Liz Edwards and Rachel Stroud for creating and facilitating the workshops, and to Ellen Wilson for her planning and preparation of the materials.  Thanks also to SNH for hosting the event and to BRISC (Biological Recording in Scotland) for funding the catering.

The next workshops and their topics are:

Each workshop has a full complement of attendees, but we are running a reserve list for each in case a vacancy arises.  If you are interested in being added to the reserve list please email Christine Johnston, NBN Scottish Liaison Officer. 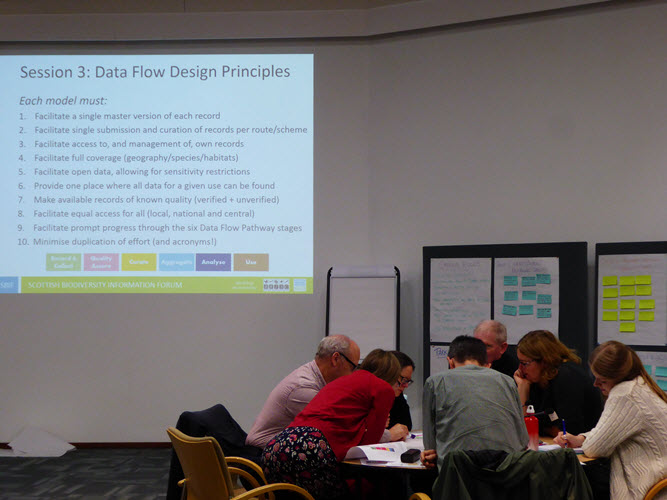