Thank you to those of you who completed the NBN Conference feedback questionnaire.

Your comments are really helpful in assessing the format of the annual conference and in helping us to plan subsequent events.  The responses (given by just under half of attendees) are shown below. 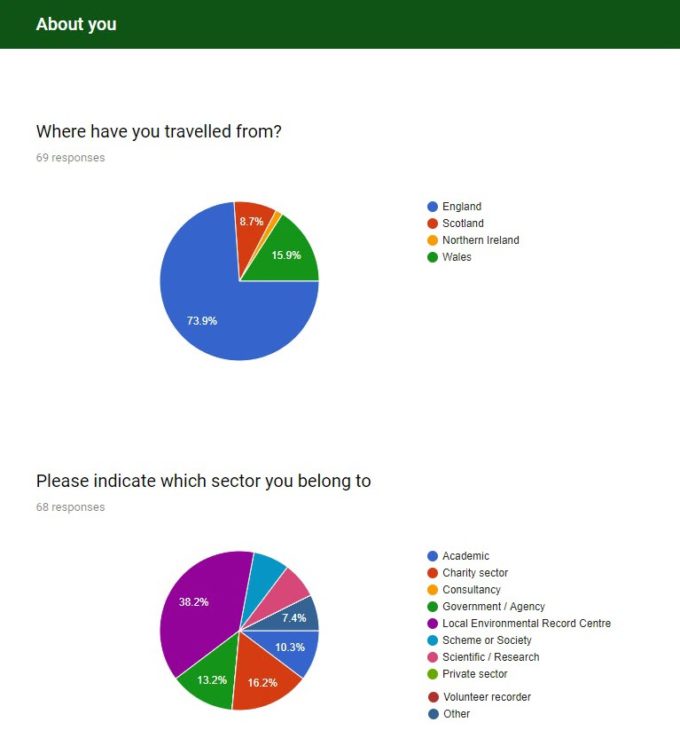 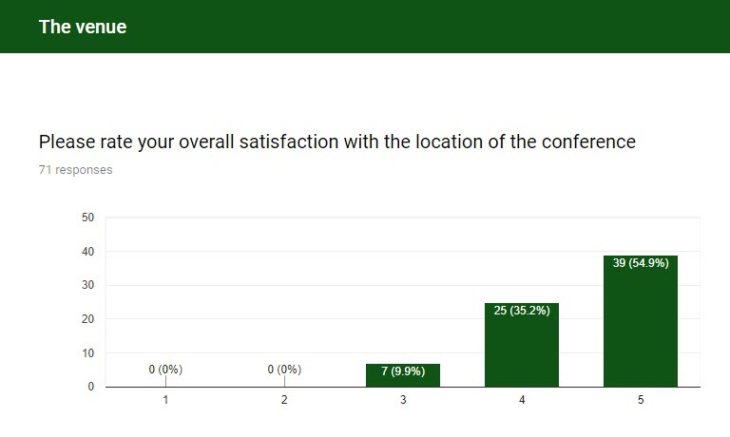 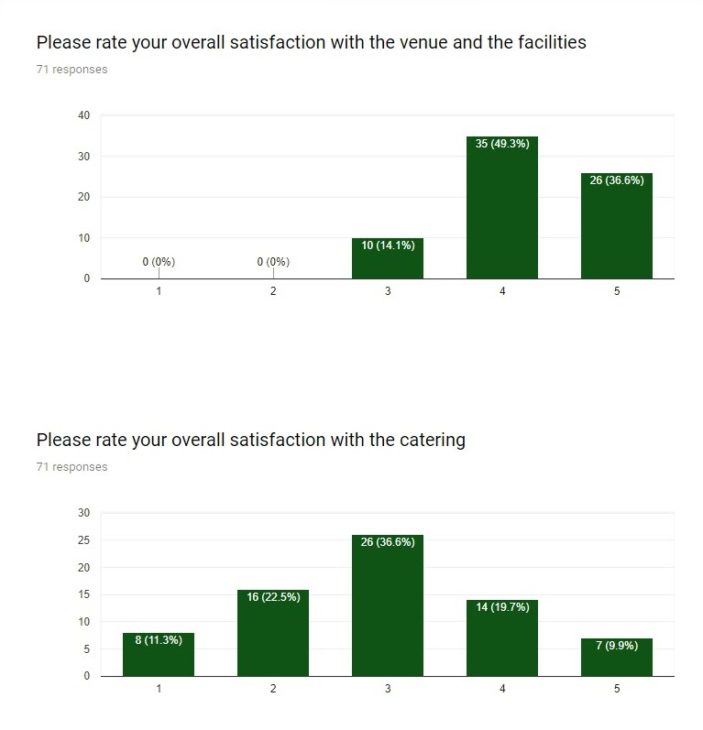 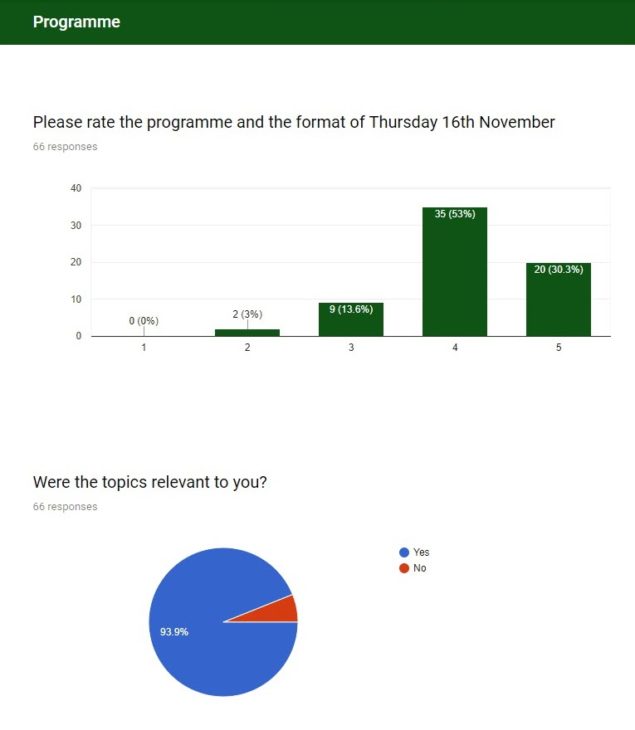 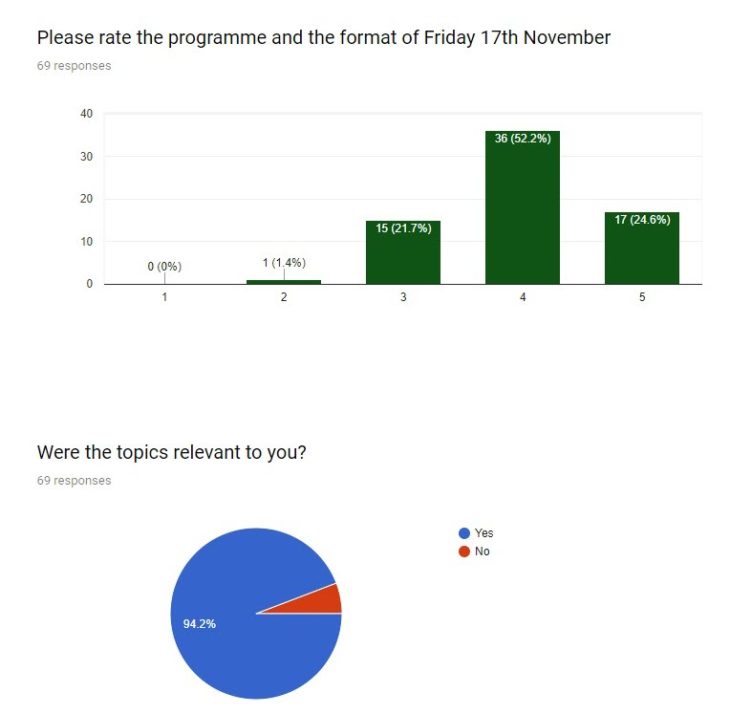 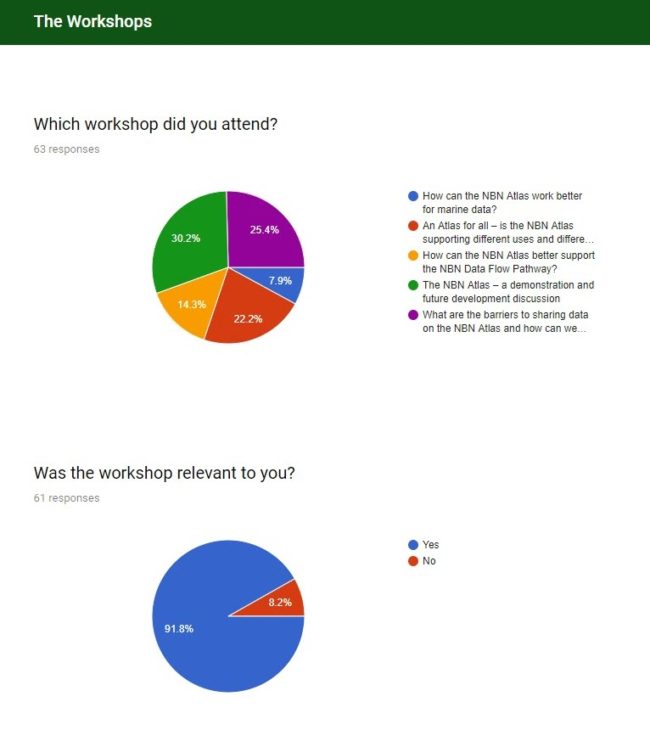 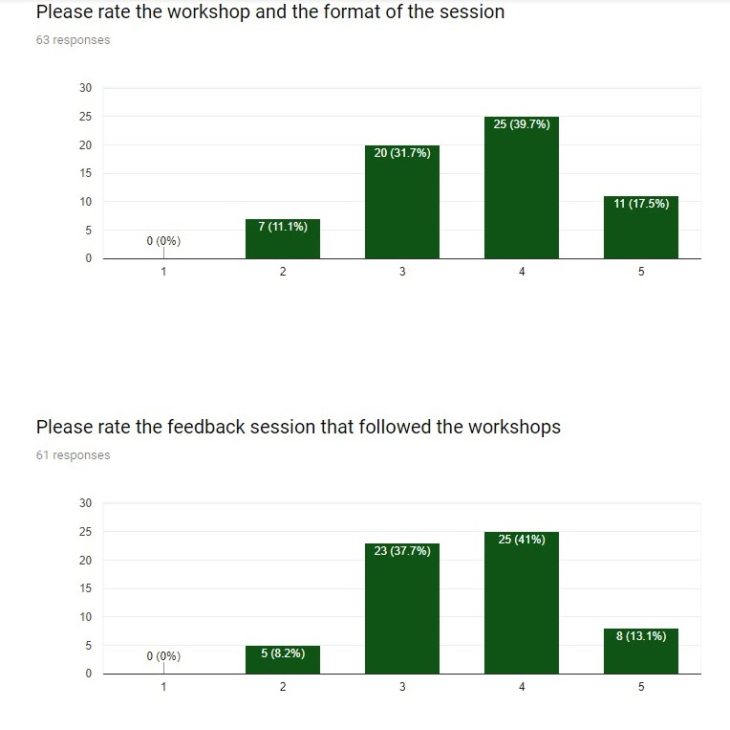 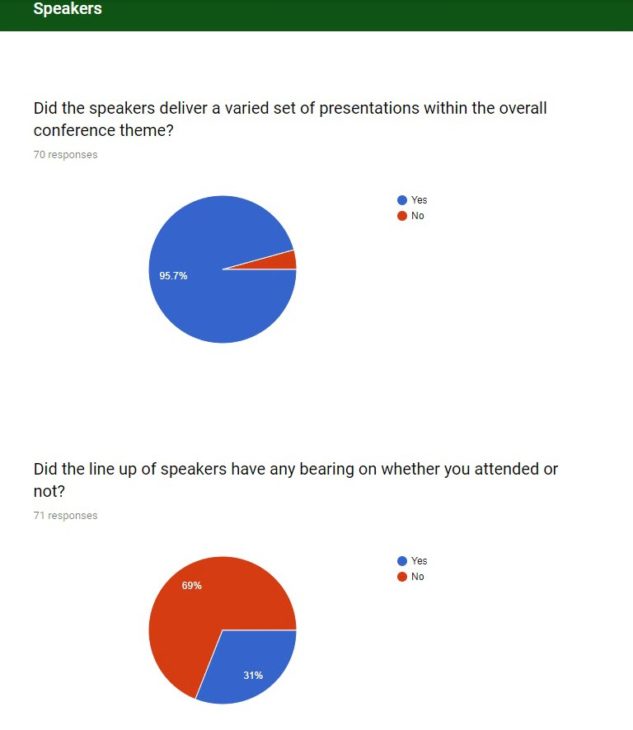 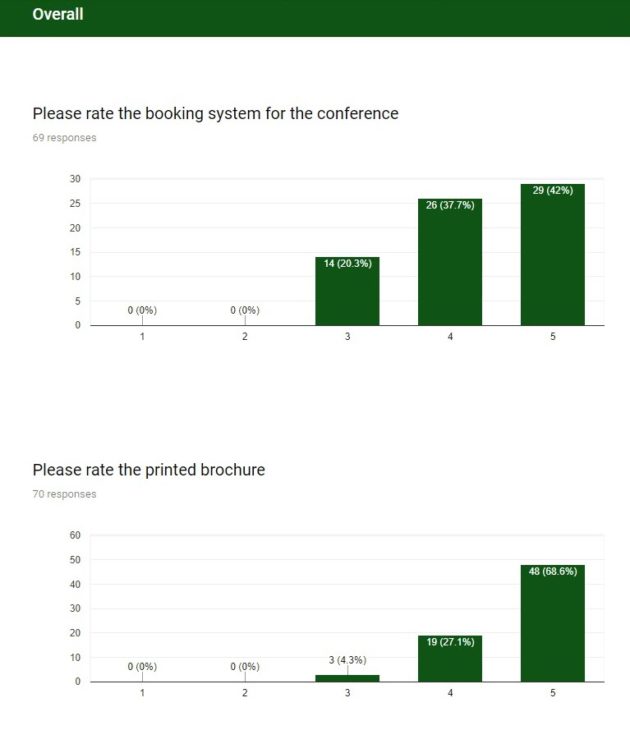 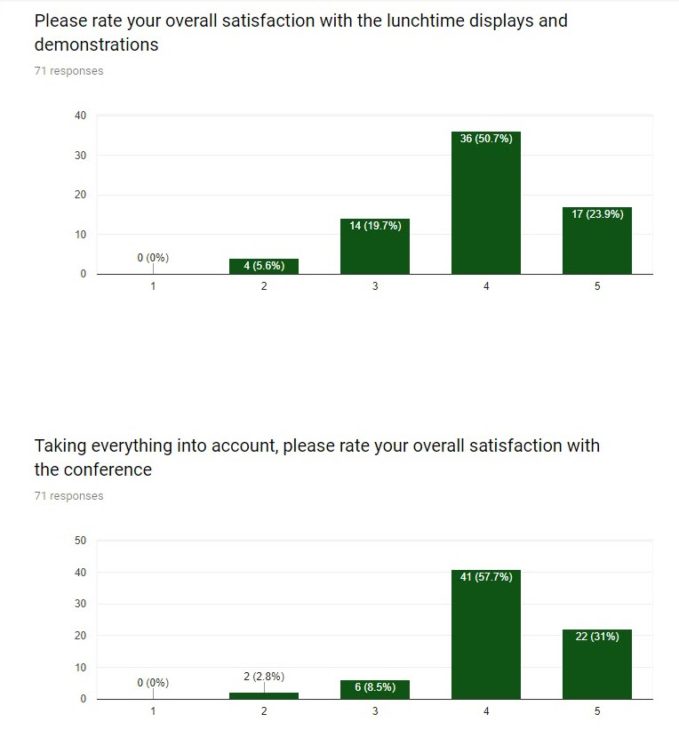 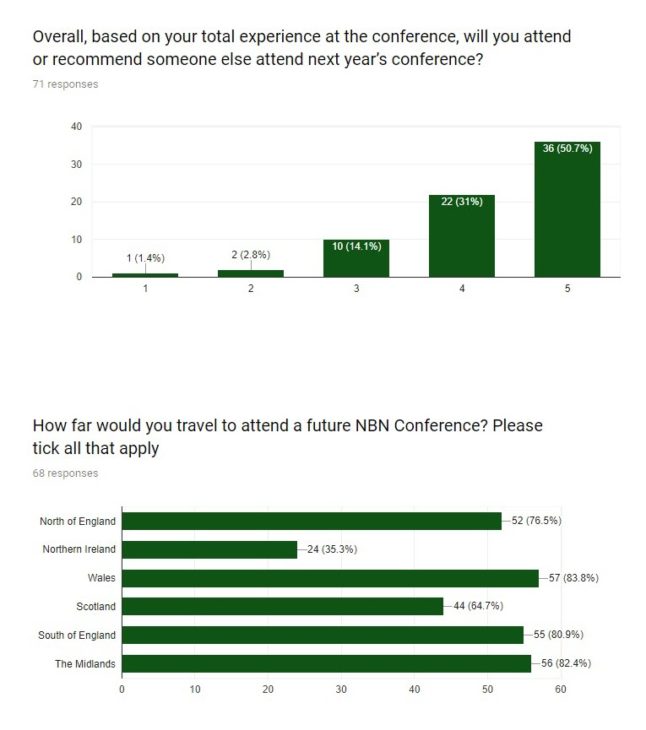 Overall summary in addition to the charts above

Delegates liked the format of talks of different lengths and workshops – though some thought that the workshops had too much time allocated to them on Thursday afternoon. The 5-minute Student Speed talks were especially popular.

The duration of the coffee and tea breaks as well as a generously long lunch-break were appreciated, as delegates enjoy networking with each other.

Some delegates were disappointed that there was no time for questions after Friday morning’s speakers.  Others suggested that Friday’s programme had too many presentations in – just one less would have allowed for longer Q&A sessions after each speaker.

Delegates who have attended previous NBN conferences think that they are going from strength to strength and that the workshops help delegates feed into the development of both the NBN Atlas and of the Network.

Topics that would have like to be covered included examples of innovative uses of data from National Schemes and Societies, stories from data, more on the use of data and on verification, more marine content, more on other data collection websites such as iSpot/ iRecord and examples of how the data are used in decision-making.

We will be starting to plan this year’s event in February.  One of the considerations is whether we should hold it on a Wednesday / Thursday instead of a Thursday / Friday.  A number of people have suggested that Friday is a difficult day due to travel costs and travel times.  We would love to hear your thoughts and would really appreciate it if you could let us know your preference.

For the first time, we included the NBN AGM into the NBN Conference 2017.  This is what you thought: 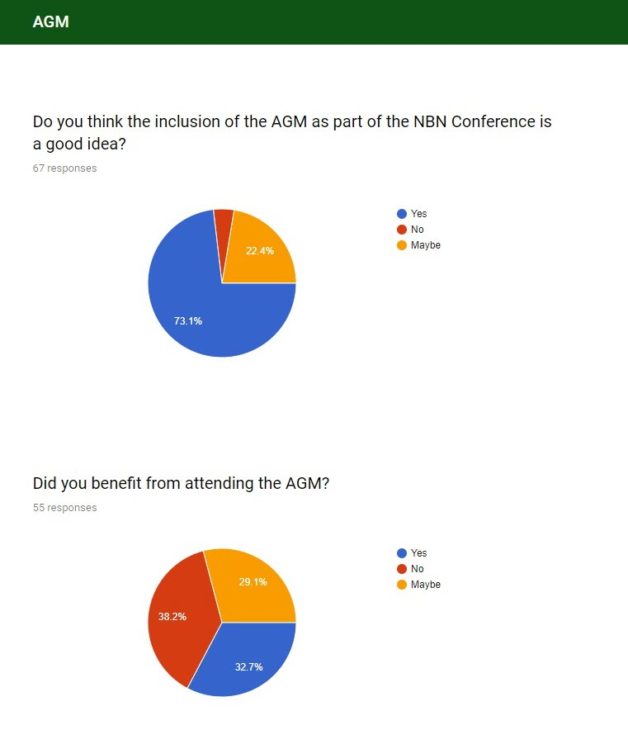 Overall summary in addition to the charts above

It was generally felt that it would be better to have some context before the AGM, especially if there are decisions to make. It was also felt that not enough notice was given of the AGM and that old and proposed documents need to be available and the significance of any changes highlighted.  The AGM shouldn’t be planned to clash with any other activities, such as a tour of Museum Collections.

Feedback on the UK Awards’ Ceremony