The NBN Strategy 2015-2020 sets out the strategic direction for the National Biodiversity Network (NBN) over the next five years.

It sets ambitious objectives and seeks innovative approaches to motivate Network members to collaborate, and become increasingly committed, to achieving the NBN vision. This strategy supports and provides direction for Network members and communities throughout the UK in recording, collecting, verifying, curating, aggregating, analysing and making use of biological data. The NBN seeks to develop a data literate culture, where the value of biological data is appreciated, especially in relation to its onward re-use. The NBN will work together to embed itself, and its collective data and knowledge creation at the heart of UK biodiversity learning and environmental decision-making.

Preparation of this Strategy

Two Extraordinary General Meetings in Feb 2013 and Feb 2014, attended by a wide range of NBN members, saw the development of a draft skeleton structure for a new NBN strategy. The Secretariat then sought wider consultation and input over the 10 months from July 2014 to February 2015. This was achieved through a questionnaire that was completed by more than 220 people. The Secretariat also organised a series of nine workshops in Wales, England, Scotland and Northern Ireland. Further consultation was undertaken specifically on the NBN technical infrastructure and the creation of a new NBN vision. The Secretariat sought feedback about NBN Gateway (the forerunner to the NBN Atlas) user needs using a second questionnaire that was completed by more than 150 Network members. The Secretariat employed consultants to undertake a full review of the NBN Gateway and the NBN website.

As a result of this wide engagement process more than 450 Network members and associates, data providers, potential collaborators and NBN Gateway users throughout the UK influenced the development of this five-year strategy. The intention was to ensure the Network’s collaborative nature was reflected in the preparation of this strategy.

The following articles summarise activity during the Strategic Review: 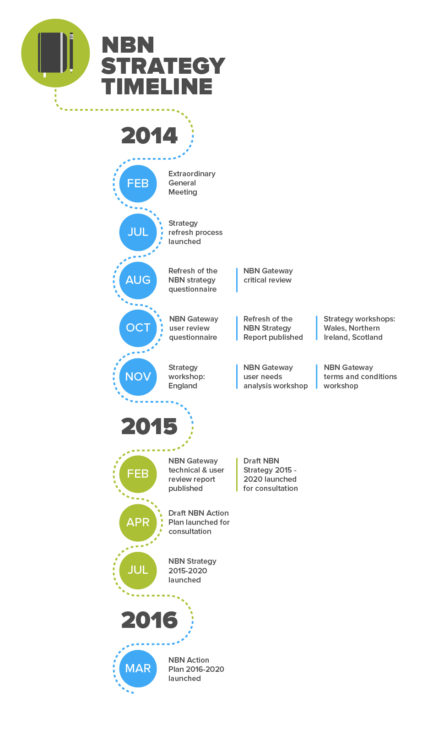