In June 2020, PTES (with funding from Back from the Brink) ran a successful “Stag Weekend” where it promoted its annual stag beetle survey, The Great Stag Hunt, and encouraged people to learn about stag beetles and how to help them.

In total (from 1 January to 30 September) there were 16,766 stag beetle records submitted to the Great Stag Hunt website. This far surpasses any other year when the survey has run, possibly due to people being at home more and an increased interest in nature during the Coronavirus restrictions. Once verified, there were found to be 14,281 stag beetle records (a record may include more than one beetle, and or larvae). Of the 18,805 adults recorded, 7,754 were female and 10,048 were male (1,003 were unknown) and 1224 larvae. There were several new sites for stag beetles including two of particular note as they are on the edge of the range: Starcross in Devon and Long Stratton in Norfolk.

Stag beetles need dead wood that is either underground or in contact with the soil. Female beetles lay their eggs in the soil next to rotting wood and the larvae feed on the wood for several years. Stag beetles emerge in May and June on warm evenings and fly around to look for a mate. They inhabit our gardens, woodlands and parks, mainly in the south east of England, but also into some parts of Wales.

How to help stag beetles

Log pyramids are a vertical log pile where the logs are buried upright providing plenty of underground dead wood for stag beetle larvae to feed on. Please see instructions on how to make your own log pyramid on the PTES website. 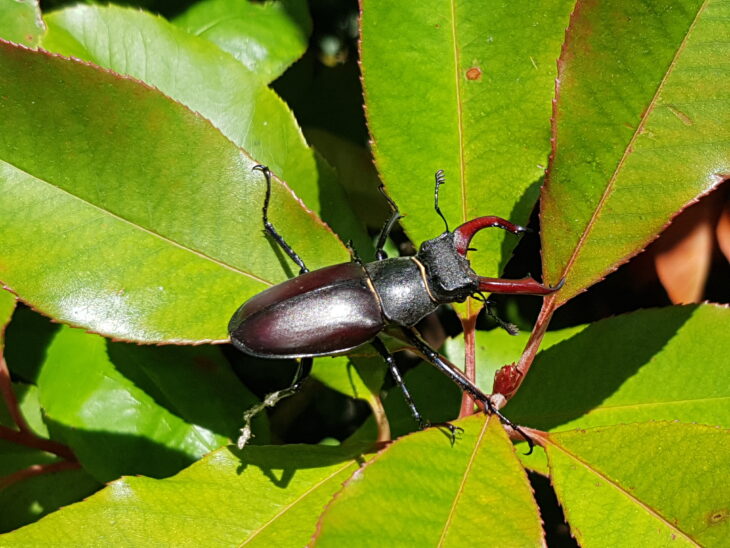 Reflections on retirement from the NBN Trust