NBN Atlas – one year on

This time last year a major change to how we share data through the NBN took place.

It was the end of an era with the decommissioning of the NBN Gateway on the 31 March 2017. The NBN Gateway had been an excellent tool enabling data sharing on a scale never seen before in the UK, but the technology behind it needed to be significantly updated and the NBN Atlas was developed as its replacement.

As the NBN Gateway was being decommissioned, we had developed the first phase of the NBN Atlas, which, along with the NBN Atlas Wales, was live and available on 1 April 2017.  These two NBN Atlases joined the NBN Atlas Scotland, which had launched the previous year. Despite the tight timescales, we had a functioning biological information management infrastructure up and running, within budget, on time and with a massive 215 million species records available. None of us should underestimate that achievement.

So, what has happened in the year since launch?  We thought it would be interesting to show how much more has been achieved along with some key statistics.

Number of Records on the NBN Atlas

As at 23 March 2018, the NBN Atlas held just over 218 million species records, an increase of 3 million since launch.  Taking into account that we were unable to transfer some data partner records from the NBN Gateway to the NBN Atlas due to access and licensing concerns, this is a very positive increase.  It is especially important to remember that there were only 133 million records, of which only 71% were publicly available, on the NBN Gateway when it was decommissioned. 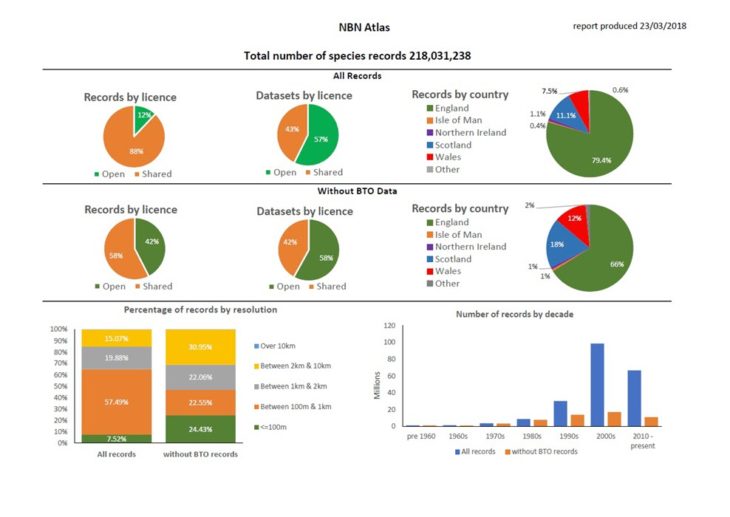 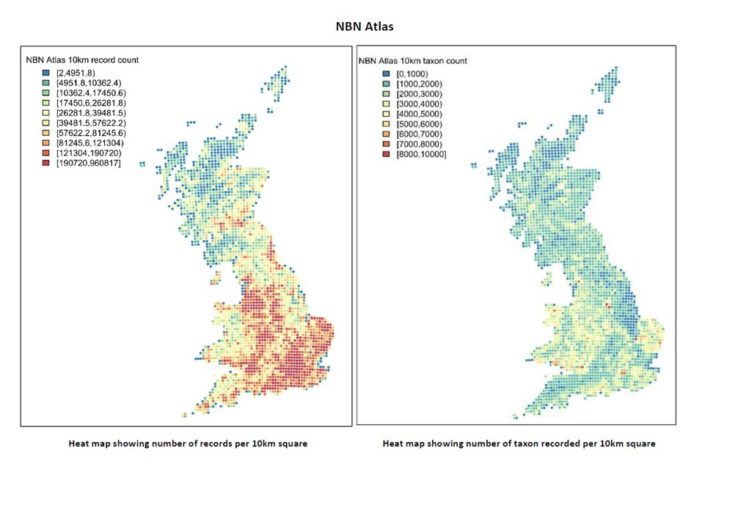 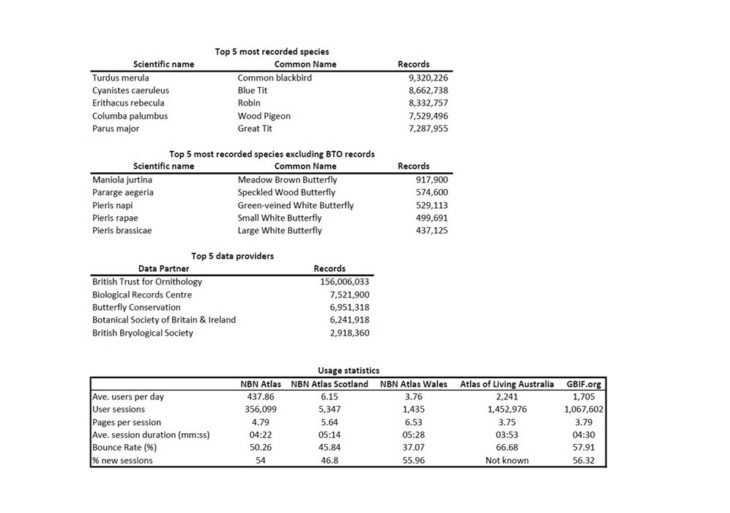 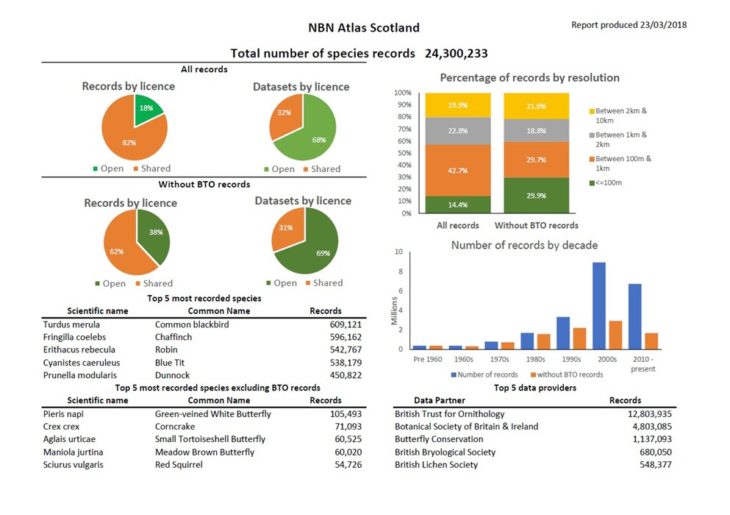 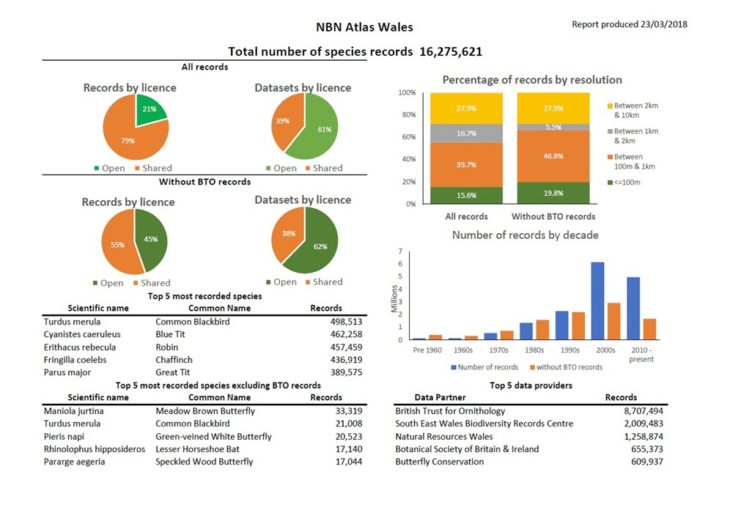 Number of registered users of the NBN Atlas

As of 3 April, there were 3219 registered and active users of the NBN Atlas.  This is a reduction on the number of users (5449) who logged into the NBN Gateway during 2016 – 17, but the figure is seeing significant increases each month and the average users per day is 434.  It should also be noted that a lot of NBN Atlas functionality can be used without registering, so the total number of users is likely to be a higher figure.

We produced data upload templates and guidance for sharing data via the NBN Atlas platforms.

All of the NBN Atlases hold their data in Darwin Core format, the internationally recognised standard for biodiversity data.

As of 3 April 2018, we are delighted to announce the launch of the NBN Atlas Isle of Man. Read more in our news story.

Images on the NBN Atlas

We are in the process of removing all of the Encyclopaedia of Life images and replacing them with the very generous contributions of some of our Network partners.  We have had 2,000 images and occurrence records from Dave Fenwick (APHOTOMARINE) since 2017 and are now adding 230 images from Derek Crawley of the Mammal Society and 45,000 records and over 100,000 images from Malcolm Storey (BioImages).  Paula Lightfoot has also supplied 20 images.  We are hugely grateful for the provision of images to the NBN Atlas and would like to thank all of our contributors.

As well as removing the EoL images, we are in the process of reviewing the layout and presentation of images on the NBN Atlas to ensure they have a consistent look and feel.

If you would like your images to be shared with the NBN Atlas please read our guidance for sharing species images or contact data@nbn.org.uk

Occurrence records on the NBN Atlases now require an identification verification status. There are six options for data partners to choose from:

The description of each option can be found on the NBN Atlas Documentation and Help Portal. Although not available yet, Accepted and Unconfirmed records will be displayed in different colours on the occurrence record maps. It will also be possible to filter and search records by identification verification status. These changes will be available on the NBN Atlases in early April.

This new site brings together information and guidance for users of the NBN Atlas, NBN Atlas Scotland, NBN Atlas Wales, NBN Atlas Isle of Man and all subsequent NBN Atlases, in a clear way, with straightforward navigation to each of the subject areas.

The NBN Atlas Documentation and Help Portal can be found by clicking on the ‘Help’ link on the top right hand side of each of the NBN Atlases.

Much has been achieved over the last year, but there are more developments planned for the future.  Here are just a few examples of work to come:

Burial grounds can be poorly understood in terms of their biodiversity when compared to other public green spaces. Many people feel that they need permission…

Thames Valley Environmental Records Centre (TVERC) Field Volunteer Are you a nature enthusiast? Do you have experience in species identification and wildlife surveys? Would you like the…

In response to the COVID-19 pandemic and UK Government advice, all NBN Trust staff are now working from home. If you need to contact us,…