Having recently returned from three weeks in western Greenland, I thought I would take this opportunity to give an insight into the fieldwork I am involved in as a member of the Greenland White-fronted Goose Study group.

The Greenland White-fronted Goose Study was established in 1979, and is an independent organisation dedicated to the study and conservation of the endangered Greenland race of the circumpolar White-fronted Goose Anser albifrons. The global population of Greenland White-fronted Geese Anser albifrons flavirostris showed a significant decline from 23,000 individuals in the 1950s to approximately 15,500 in the late 1970s.  It was suggested that this decline was primarily due to the loss of the peatland habitat traditionally used by the geese in Britain and Ireland.  Protective legislation halted shooting on the wintering grounds, and conservation measures in the early 1980s lead to an increase in population numbers to 27,000 by November 1989, and a further increase to 35,700 in 1999.  However, numbers have fallen dramatically since then.   In March 2013 the international count located a combined global total of just 22,156 Greenland White-fronted Geese, the lowest recorded since spring 1986.

Greenland White-fronted Geese winter exclusively in Britain and Ireland, and migrate, via staging grounds in southern and western Iceland, to breed in western Greenland.  When they arrive in Greenland they moult, rendering them flightless throughout the second half of July.  While this makes them extremely sensitive to disturbance, it does make it possible to catch flocks on their moulting lakes and individually mark them (with unique collars and leg rings) and collect valuable biometric data. This enables us to monitor their migratory movements over time and ascertain important life history information on individual birds. 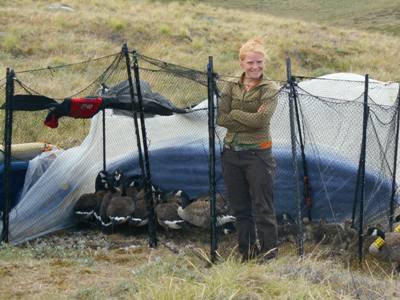 There have been 14 expeditions to Greenland since 1979.  This year was the 12th expedition, and the 6th survey and ringing trip (the remaining expeditions were survey visits only) to the Isunngua area of west Greenland which supports birds from the Scottish population.

During this time, the colonisation and range expansion of the North Atlantic Canada Goose Branta canadensis interior which has coincided with the local decline of the Greenland White-front, has been well documented.  This colonisation has been rapid: an aerial survey in 2000 suggested a population of c.25,000 breeding pairs in Greenland and a primary breeding range that overlaps significantly with the breeding range of the Greenland White-front.   There is increasing evidence that the current low reproductive success of the White-front population is a consequence of competition from the recent colonisation of Canada Geese in the breeding grounds of western Greenland. 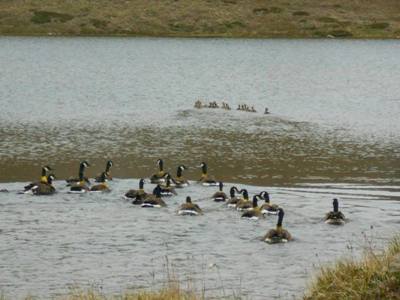 Having spent my childhood watching Greenland White-fronted Geese in Scotland, in 2008 I finally had the chance to visit them in their homeland.  This was a month-long ringing expedition and upon returning home, I realised I had left a big part of my soul somewhere high in the arctic hills, so I had to return again in 2010 to look for it! Whilst there, I carried out behavioural research for my undergraduate dissertation looking at the interactions between the Greenland White-fronts and Canada Geese.  In 2012, I was drawn back again, and this time I undertook a census of the study area. And, still searching for that piece of me that is eternally held in the Greenland permafrost, I returned this summer for a month-long ringing expedition as part of a catching team of ten.

Home for the month is set by a large, low level lake, locally known as Sanningasoq, in the foothills of the Isunngua region, once the stronghold of the Scottish population of Greenland White-fronts.  In previous years we have been fortunate to secure a helicopter to drop our food and kit into camp, but unfortunately this year we were pack horses for the first few days, shifting over 300 kg of food, ringing gear, boats, nets and personal kit over to camp!  A six hour roundtrip makes you appreciate every last packet of dried food – though that said – it doesn’t take long to get bored of porridge, muesli, nuts, crackers, lake-cooled month-old cheese, rice, pasta, sausage mix, soya, digestive biscuits, custard and Angel Delight (with occasional goodies thrown in to keep spirits high).

After assessing the local distribution of the geese, and carrying out a dry catching run at camp, we were ready to walk the nets and boats higher into the hills to start catching.  We had seven days catching, individually ringing 185 Canada Geese and five Greenland Mallards Anas platyrhynchos conboschas.  Unfortunately the local decline of Greenland White-fronts was more notable than ever before, resulting in, sadly, a total lack of Greenland White-fronted Geese caught, and only nine seen in the core study and catch area.

It is unlikely that we will be returning to the Isunngua area of west Greenland again in the near future to catch Greenland White-fronted Geese, although there will always be plenty of Canada Goose ring reading to be done there, and I do need to appease the part of my being that belongs up there! 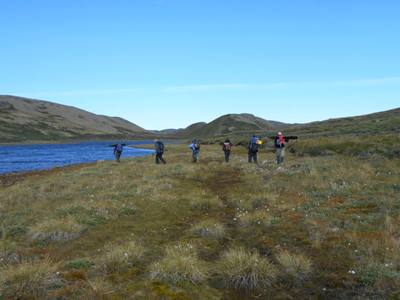 This is by no means the end of the story, if anything, it is the start of a new chapter, and a continued quest to find, follow and understand the ever-elusive Greenland White-fronted Goose.

If you are interested in reading more about goose catching in Greenland, we have published a ‘catching guide’ which can be found here.  We are continually grateful for submissions of re-sightings of Greenland White-Fronted Geese in Britain and Ireland and Canada Geese in the United States.  Please send any information to Tony Fox.  For further information on the work of the Greenland White-fronted Goose Study Group and White-front conservation please visit the website or contact myself or David Stroud.

A group of the UK’s rarest lizard – the sand lizard – has been released back into the wild in Dorset. Over 140 of these…