On the 16th April 2015, the Scottish Biodiversity Information Forum (SBIF) held its first conference at the Battleby Conference Centre, Perth.  The theme was Making the Most of Biodiversity Data and the purpose of the day was to provide Forum supporters with an update on our Action Plan, to launch our first publication (also called Making the Most of Biodiversity Data) and to look to the future by discussing proposals, put forward by the Forum’s Steering Group, to develop a National Data Flow Pathway (NDFP). 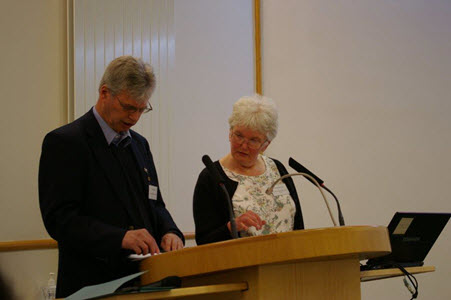 We were pleased to welcome as our keynote speaker John Sawyer (CEO, NBN Trust) who treated us to a reflective and insightful talk about Scotland’s biodiversity from both a personal and professional point of view.  He emphasised that knowledge, not just data, is key to protecting biodiversity, and that a workable data flow pathway is important to ensure data are available.  The four key ways forward that were outlined (continue recording; captivate & engage recorders; develop a new data infrastructure for Scotland, and increase the use of data) are embedded in the NBN’s revised strategy. The Forum is currently exploring and developing ways of working with the NBN to help deliver that strategy. 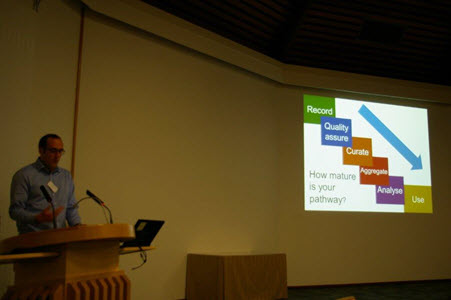 Next, our case studies publication “Making the Most of Biodiversity Data” was launched by the chair of the Forum, Craig Macadam (Biological Recording in Scotland) – you can read more on this publication here.  Craig reminded us that 40 years ago data sharing was being discussed in Scotland, and that although much has improved since then, there is still work to do to improve data mobilisation.

Following on from the launch, three of the case study authors gave short talks expanding on their subjects.  Georgia Conolly (Seasearch), kindly standing in for Calum Duncan, outlined Seasearch’s underwater citizen science project which facilitates the collection and dissemination of marine data by divers. These data are used to support projects such as the proposal for a Marine Protected Area (MPA) off-shore from Arran in the Firth of Clyde.  Ed Mackey (Scottish Natural Heritage) explored ideas for using GIS and spatial analysis for site condition monitoring, and also for the creation of the EUNIS land cover map of Scotland.  He emphasised that there is a role for organisations such as the Forum and the NBN to promote standards.  Graeme Wilson (The Wildlife Information Centre) finished this section with an outline of the role of a Local Environmental Records Centre in collecting, managing and delivering biodiversity data.

In the run up to lunch we heard about progress with another two of the actions within the Forum’s Action Plan.  Dan Chapman (Centre for Ecology & Hydrology) gave a well-received update on a study he has been conducting, as part of Action 7, which is looking at how much overlap there is between data available nationally (via the NBN Gateway) and data available locally (via The Wildlife Information Centre (TWIC)).  The study is showing that, potentially, if all the data for the chosen species were available to both sources, the NBN might gain 38% more 10 km squares of data and TWIC 18% more, concluding that more data sharing would benefit all users.  More work needs to be done to understand why data are apparently not shared, and to understand if the results hold for other areas of Scotland and other species.  Scot Mathieson (Scottish Environment Protection Agency) followed this with an invitation to delegates to take part in our lunchtime ‘box-ticking for biodiversity’ exercise, a survey to determine the data needs of Forum supporters, and whether these needs are being met (Action 3 in the Action Plan). The results of this survey will be published later.

The afternoon was devoted to workshops and discussions about the Forum’s proposal to develop a National Data Flow Pathway (NDFP).  The proposed pathway aims to describe an efficient, equitable and sustainable network and core pathway, and present a potential ideal solution to the flow of species and habitat data in and out of the system at local and national levels.  A copy of the NDFP proposal can be accessed here. 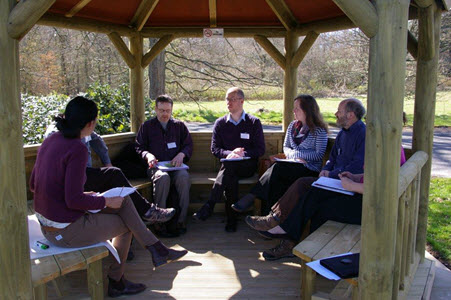 Delegates divided into workshops for the first hour, which was followed by feedback of the comments from each workshop to all delegates.  A full report summarising the comments made by the workshop participants is currently being written, but in summary, while there was no major disagreement about the way the pathway had been described, it was recognised that the reality of data flow is very complex.  Major points that were raised, relating also to the delivery of the pathway (in no particular order of importance), included the need to: support quality assurance and verification stages; ensure terminology (such as ‘aggregation’) is clear and well-defined; promote data input from all sectors, especially the commercial sector; seek to have full coverage of LERCs across Scotland; speed up the process of making data available; reduce the amount of data duplication.  The full report will be considered by the Steering Group at their next meeting. 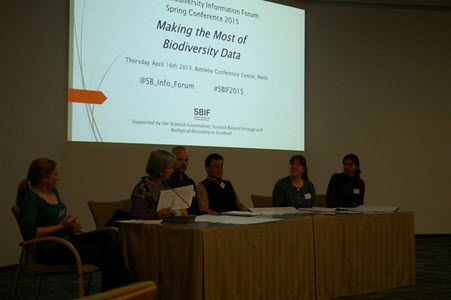 The Forum would like to thank all the speakers, the conference chair (Nick Fraser (National Museums Scotland)), the workshop facilitators (Sarah Eno (TWIC); Guy Harewood (Stirling Council); Elspeth Haston (Royal Botanic Garden Edinburgh); Karlene Hill (Scottish Wildlife Trust); Jonathan Willet (BRISC/Highland Council); Ellen Wilson (RSPB)) and all the delegates for contributing so much to the discussions.  We would also like to thank the Scottish Government, Scottish Natural Heritage and Biological Recording in Scotland for financial support.