Whilst it is usual to put forward a single nominee for Honorary Membership of the NBN Trust, this year, as with 2018, we received a joint nomination for two individuals.

These two nominees’ work relates primarily to Recorder 6 software, and many of you will immediately know that the two individuals who received Honorary Membership this year are:

Recorder 6 is a long-established software tool for entering, collating and exchanging records of species and habitats.  Originally designed as a companion to the NBN Gateway (the forerunner of the NBN Atlas) and built to NBN Standards, it is used by a range of organisations including local environmental record centres, conservation organisations and recording groups, schemes and societies, as well as individual biological recorders.

Mike and Sally have been involved in developing Recorder 6 and providing user support for more years than anyone currently involved can remember. When the NBN community moved to Recorder 6 from previous versions of the software around 2003, Mike and Sally worked with countless organisations and individuals within the Network to help them migrate their data into the new system. Sally estimates that she and Mike collaborated on over 50 data transfers; the largest being nearly 2 million records for the Centre for Environmental Data and Recording in Northern Ireland.

Over the years, as attention moved towards new technology, funding for Recorder 6 started to reduce, until the long-standing financial and administrative arrangements eventually ceased in March 2018.

Mike and Sally – driven by their loyalty to the Recorder 6 community – worked hard to get alternative, interim support arrangements in place, so that users could continue to have access to essential dictionary updates and support. During this time, Mike and Sally invested significant amounts of their own time in keeping Recorder 6 going.

Since 2018, the Recorder 6 Steering Group has been working on establishing longer-term financial, management and maintenance arrangements and we are pleased to report that a new software licence for Recorder 6 was launched last week.

Throughout this process, the Steering Group has valued Mike and Sally’s advice on all aspects of Recorder 6 and it is delighted that they will continue to be involved in maintaining the system under the new licensing arrangements.

Working together as a team, both Mike and Sally have played a fundamental role in ensuring biological data has continued to be available for use by countless organisations as well as users of the NBN Atlas.  It therefore gave us great pleasure to award Honorary Membership of the NBN Trust to Mike Weideli and Sally Rankin.

The award for Sally and Mike was given at the NBN Conference on 14 November.  Sally was in attendance to receive her award and Mike’s was collected on his behalf by Clare Blencowe, of ALERC. 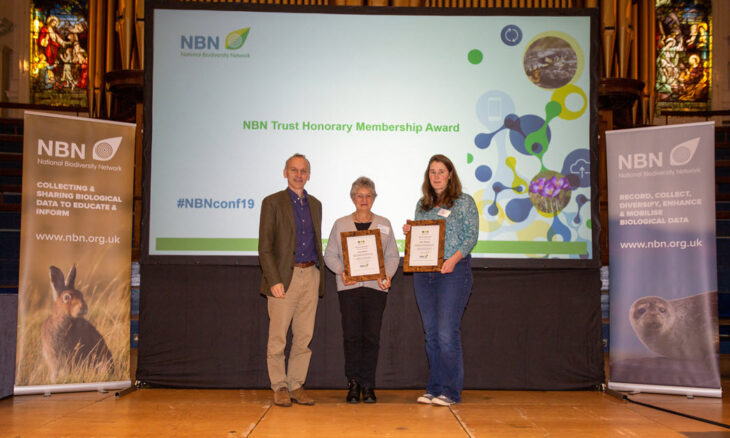 A pleasure and a privilege to see Mike Weideli and Sally Rankin awarded Honorary Membership of @NBNTrust today, for their decades of work on Recorder 6.

Read about the new licensing arrangements on the NBN Forum https://t.co/ROMRYl4Ps1#NBNconf19 pic.twitter.com/sBAEWDA1e8

Working under the direction of the Commercial Director and in line with FSC’s new business strategy, this is a key operational role which will have…

Working under the direction of the Commercial Director and in line with FSC’s new business strategy, this is a key operational role which will have…

We are pleased to announce that Damien High, a Masters student at the University of Salford, has started a 12 week long placement with the…