For the Identification Trainers for the Future, May has been absolutely packed with workshops!

It all kicked off with a foray into mosses, ferns and other allies. Natural History Museum plant expert, Fred Rumsey taught us about the incredible lifecycles of these primitive plants and we managed to see some moss and liverwort reproductive structures under the microscope. There were the male and female organs of the sexual stage and the sporophyte capsules enclosing the miniscule spores that make the bryophytes such good colonisers.

After learning some more about groups of mosses, we took a field trip to Abbey Wood. Here we began to realise how vast bryophyte diversity really is. Looking on trees, rocks and the damp soil, we found a variety of tufted, cushiony acrocarps and spreading pleurocarps. Some of my favourite finds were the liverworts concealed on overgrown banks. I would never have noticed them myself, but they are really striking once pointed out.

Back at the museum, we took advantage of the diversity of the wildlife garden to familiarise ourselves with some fern species. Then, Fred showed us the British synoptic collection of ferns and allies. It was interesting to see some of less common specimens and it reminded us how much of a fantastic resource the museum collections can be.

The second week of May was our freshwater invertebrate course with Steve Brooks and Ben Price. We began with some pond dipping in the wildlife garden’s three ponds. On bringing our catches back into the lab, we discovered that they contained a wealth of larvae from midges, damselflies, mayflies, caddisflies and more.

Over the next few days we learned how to identify many of these organisms. Steve taught us how to mount midge larvae head capsules onto slides and look for their diagnostic features. Then we worked through keys to dragonfly and damselfly larvae and their exuviae (shed skins).

We also learnt how to tell the difference between the different families of mayflies. Once familiar with them, we accumulated our knowledge and put together an online multi-access key to Mayfly Families. 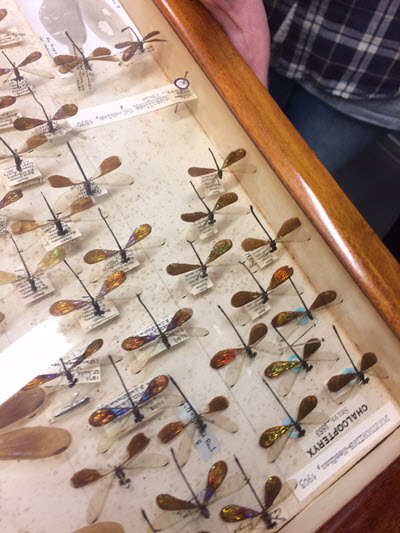 We finished off the workshop with a trip up to the collection of small orders, where most of the freshwater invertebrates are housed. There were some fantastic dragonflies and damselflies with metallic, translucent wings. The wing colours are due to a structural reflection of light and the wings are some of the thinnest examples of this in the insect world.

We also took a slight detour into the drawers of Phasmatidae where we saw the once longest (now second longest) insect in the world, Chan’s Megastick. It even had its own world record certificate! 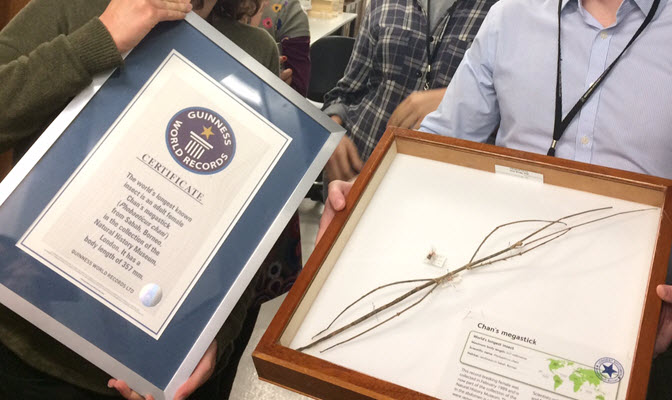 After freshwater invertebrates, we had a day workshop on earthworms with Emma Sherlock. We began by going over some of the types of earthworm. Then we went out and found some earthworms in the wildlife garden compost heap. Emma showed us how to best preserve them in the field and we had a go at identifying them using Emma’s very comprehensive key. After that we went into Kensington Gardens to try some surveying techniques.

Our final workshop of the month was on flies. We began with a visit to the pinned Diptera collections with Zoe Adams. We saw examples of some of the most unusual flies in the world. Amongst them was one of the famous stalk-eyed flies who use their massively overproportioned hammer-heads to fight for females. We also saw flies stored on slide mounts and in alcohol jars, depending on what is best for their group.

After an overview of fly families with Erica McAlister, we were all itching to see some real, live flies. We headed out on a field trip to Wimbledon Common armed with nets and pots. After some energetic sweeping in a variety of different habitats, we had found a wide diversity of flies. We headed back to the museum to take a look at them.

Back in the museum, Diptera’s Daniel Whitmore and the Angela Marmont Centre’s Chris Raper showed us two different methods for pinning our flies. We also attempted the fiddly task of pinning out fly genitalia, which is sometimes required for identification.

Over the next few days we had some more detailed overviews of the different types of flies from the Diptera team. Duncan Sivell taught us about the ‘lanky’ Nematocera and Erica showed us some impressive robberflies and allies. Then Daniel walked us through the tiny acalyptrates, Nigel Wyatt showed us some Aschiza specimens and finally Chris taught us about the Acalyptrates. This week certainly has given me an appreciation of how large and diverse an order Diptera is!

As well as workshops, May also brought some opportunities to interact with the public.  We helped at Fascination of Plants Day at the museum where we spoke to the public about lichens and their uses in cooking and medicine.

We also helped out at a Nature Festival at Gilbert White’s house in Selbourne. It hosted educational talks on all different groups of organisms. One of these was on pond life so our new freshwater invertebrate knowledge came in handy. The pond at the house was fantastic and even had a healthy population of Great Crested Newts! In the evening we finished off the day with bat walks and moth traps. A few of us camped overnight to see the final catches of the traps. There were so many moths! Some highlights were the Elephant and Privet hawk moths which were very exciting to see.

To continue our busy workshop period into June, we will be looking at flowering plants and beetles. Look out for our next update to find out how we get on!

Written by Steph Skipp, ID Trainer for the Future