The Scottish Biodiversity Information Forum (SBIF) has this year been working on developing a National Data Flow Pathway (NDFP) for Scotland.  Through a process of drafting and consultation with its supporters, a final version of the NDFP has now been approved.  It is hoped that the NDFP will be adopted as a standard for the mobilisation of biodiversity data in Scotland.
The Scottish Biodiversity Information Forum was established in 2012 to facilitate the improvement of the flow of biodiversity data between organisations and individuals that collect data, and users of that data, with the aim of benefitting biodiversity.

Identifying the need for a pathway

From the outset we have been engaging with our supporters to identify the issues that inhibit the flow of biodiversity data, such that we can address them in our Action Plan.  Initial engagement via meetings of groups of supporters allowed us to identify that one of the main concerns was the lack of a clearly described pathway along which data (both habitat and species data) should travel if they are to be mobilised and shared for the benefit of biodiversity.

It was thought the development of a strategic overview of a pathway would provide a framework such that data collectors, managers, sharers and users could use it as a measure of successful biodiversity data handling.  As a result, a commitment to develop a pathway diagram was included as Action 2 in our first Action Plan.

Drafting and consulting on the pathway
It was decided that a pathway diagram should aim to describe an efficient, equitable and sustainable network and core pathway, and present a potential ideal solution to the flow of species and habitat data in and out of the system at local and national levels.  We also wanted to keep the diagram simple, and to avoid a complex ‘spider’s web’ effect of linked boxes that is often seen in data flow diagrams.
An initial pathway diagram was drafted by the SBIF Steering Group in February this year and consultation on the diagram took place at workshops held at our Spring Conference in April.  In summary, the Conference approved the way the pathway had been described, with a few suggested amendments, although it was recognised that in reality, data flow is very complex.  A Conference report can be found on the NBN news pages; more detailed information about the workshops and their outputs can be found on the SBIF’s Spring Conference 2015 web pages.
The diagram (see Figure 1) describes six stages and functions: survey, record and capture; quality assure; curate (administer); aggregate (administer); analyse and use. Each stage of the pathway is accompanied by lists of the main sectors of the data community that operate in that stage.  The diagram is based on the NBN’s Data Flow Pathway and is customised to reference Scotland-only initiatives such as the Habitat Map of Scotland and the NBN Atlas Scotland. 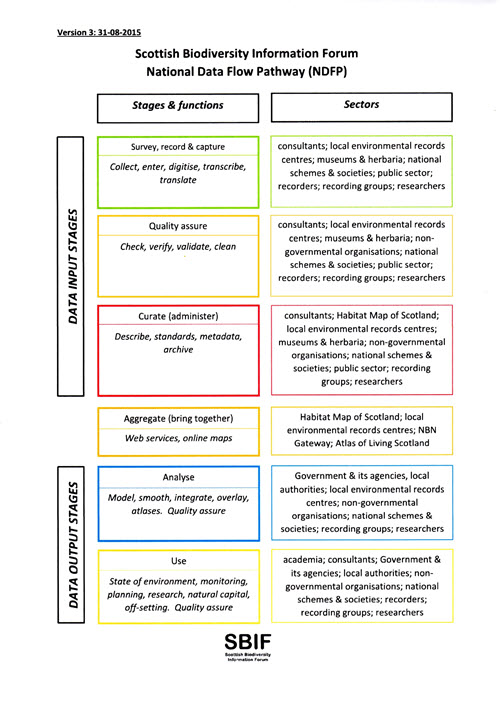 Now that the consultation process is finished we are looking to promote the NDFP to all sectors of the data community. The sectors include: academia; consultants; government & its agencies; local environmental records centres; museums & herbaria; non-governmental organisations; national schemes & societies; public sector; recorders; recording groups and researchers.  We hope to inspire people and organisations to adopt the NDFP stages into their existing processes, if they have not already done so, and that the NDFP will become the measure of successful biodiversity data handling in Scotland.

The Conference workshops also identified that improvements to elements of the pathway will be required if the NDFP is to be successfully delivered across all taxon groups and across the whole of Scotland.   Major points that were noted included the need to:

The Forum now needs to examine how these and other issues might be addressed.  In doing so we will continue working with our supporters and also with organisations such as the NBN and BRISC (Biological Recording in Scotland) in order to take the NDFP forward.

More information about the Forum can be found on our web pages
To join our supporters’ mailing list please email your details (name and organisation) to the SBIF Co-ordinator
The work of the Scottish Biodiversity Information Forum is supported by Scottish Natural Heritage (SNH), the Scottish Government and Biological Recording in Scotland (BRISC).

Survey the UK’s mammals from your garden this year

For the first time, wildlife charity People’s Trust for Endangered Species (PTES) is running its Living with Mammals survey throughout all of 2021, starting in May. PTES…

View Network News May 2021. In this issue: Nominations for the NBN Awards for Wildlife Recording 2021 have opened! Five new Trustees appointed to the…