In 2013/2014 a two year project began with the aim of providing a comprehensive description of the Parish its landscape, history and natural history by engaging people in the parish in the collection and collation of information. It provides a snapshot in time; a lasting legacy for future generations. It will also contribute biological data to the NBN Gateway and in the production of a Parish Plan.

Funded by the UK National Biodiversity Network, it had the support of the Brampton Parish Council with the Cambridge and Peterborough Environmental Record Centre setting up a dedicated web page for recording the results of the surveys. Members of the Huntingdonshire Fauna and Flora Society provided considerable help in the provision of data, leading several of the community engagement walks and helping identify species of both plants and animals.

Brampton Parish lies in Cambridgeshire, in the District of Huntingdonshire.

The village has a population of more than 5000 residents and is set to grow even larger. It lies at the intersection of two major roads, the A1 running from London to the north and the A14 a Euro Route from the east coast ports to the west. Despite the impact of this road network and the expansion of the village over the last few decades, it retains a remarkable series of sites with high biodiversity. These include three Sites of Special Scientific Interest together with a number of biological ‘hotspots’.

The landscape is largely intensive arable in the west with permanent pasture in the east, especially along the valley of the River Great Ouse. Brampton Wood in the west and Portholme Meadow in the east are prominent features of high nature conservation interest. There are also a number of disused gravel pits, which are now biologically diverse. The figure, which shows the principle habitats within the Parish is based on Google Earth imagery dated 2006 and field survey. 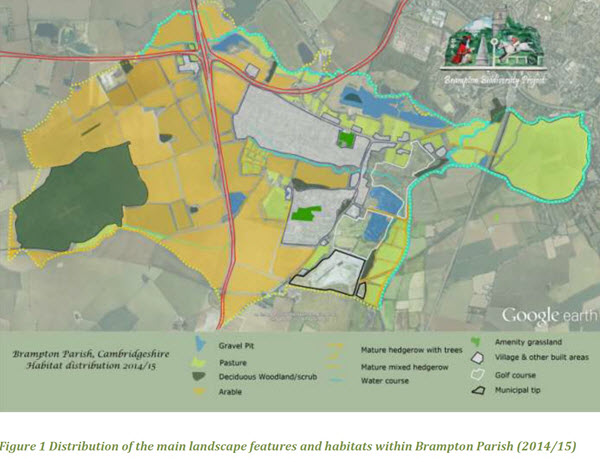 During the project, specialists undertook surveys, which included invertebrates such as flies, moths and butterflies, bryophytes, lichens and Fungi. Members of the Huntingdon Fauna and Flora Society also carried out a detailed survey of the local golf course and helped identify a number of ‘hot spots’. Several local community recording days focused on birds and flowering plants. There were also special events covering identification of bats and amphibians, as well as a look at the geology of the area.

Members of the public were encouraged to enter their records onto a dedicated website hosted by the Cambridge and Peterborough Environmental Record Centre. As a result, there are records of some 1380 species. Although a large number are single records, for a few species such as the kingfisher (Figure 2), there are many more reported sightings.

Feedback on the progress of recording involved twice-yearly newsletters and two public meetings. Collation of the results will provide detailed information, which will help in the preparation of a Parish Plan. Reports will also appear in the Parish Magazine. 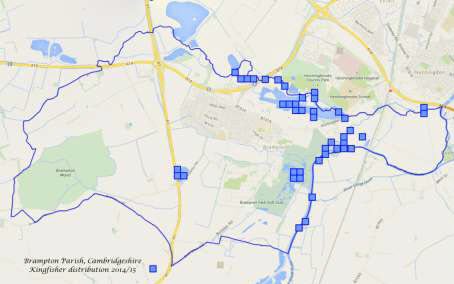