The winners of the third UK Awards for Biological Recording and Information Sharing were announced at the National Museum Cardiff during an evening ceremony on Thursday 16 November 2017.

Paula Lightfoot (from Tyne & Wear) is the winner of the David Robertson Adult Award for recording marine and coastal wildlife. She said:
“The thing that excites me about biological recording is the element of discovery – finding a species that’s new to me or observing behaviour I haven’t seen before, and I also love being part of a fantastic community of amateur naturalists with whom I can share these discoveries.
“Being able to use and contribute to the NBN Atlas is a huge motivating factor – it is very important to me to see my records in a national context and I love being able to fill gaps by putting new dots on the map!” 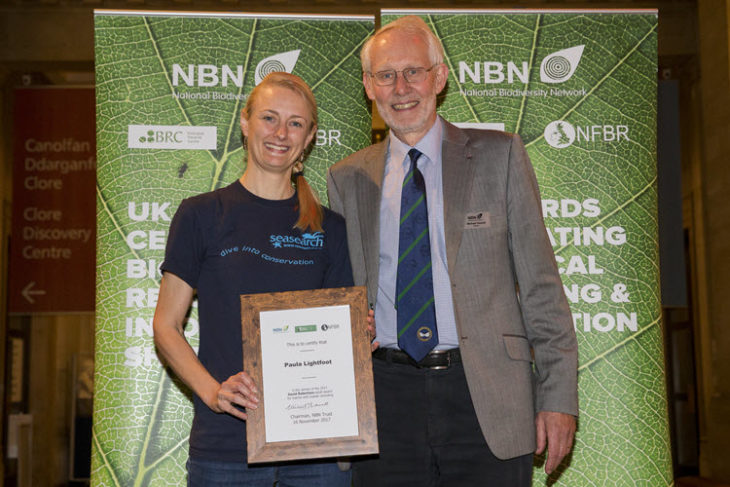 Mhairi McCann (from Inverclyde) is the winner of the David Robertson Youth Award for recording marine and coastal wildlife. She said:
“Contributing to new scientific discoveries through undertaking novel research is very exciting – especially for a secondary school pupil!  I am very passionate about the environment and biological recording is one way of helping us to understand more about it. I am particularly interested in the human impact on nature and believe that the more we know about nature, the better placed we are to help take measures to protect it.

“My work as part of ReRoute: Scotland’s Youth Biodiversity Panel (a group of 15 young volunteers from across Scotland) helps advise organisations and the Scottish Government on how best to engage young people in nature. I believe this engagement of young people is vital in ensuring our current protection and enhancement of the natural environment is sustainable for years to come.”

Peter Hodge (from East Sussex) is the winner of the Gilbert White Adult Award for recording terrestrial and freshwater wildlife. He said:
“It’s not really anything to do with the thrill of the chase; because the recording happens later, when you get home. I do it because I want to make use of the records and share them. Otherwise what else do you do with records? Leave them at home and die with them. I see recording beetles as doing my share of building up a county archive: contributing to a county list.” 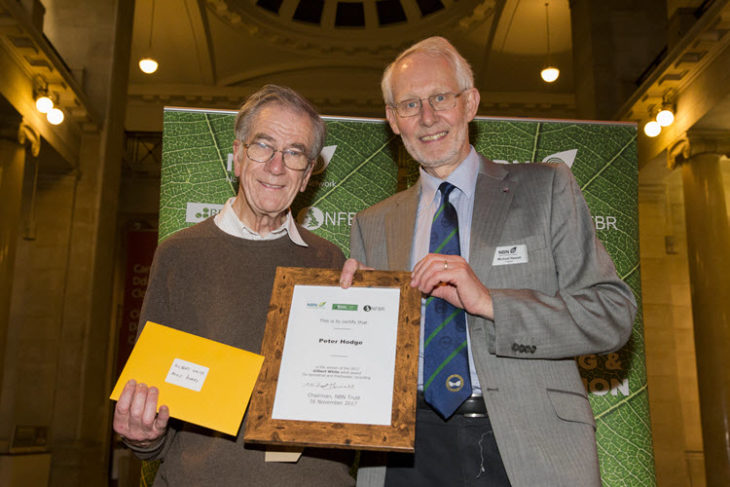 Jann Billker (from Buckinghamshire) is the winner of the Gilbert White Youth Award for recording terrestrial and freshwater wildlife. He said:
“I like to explore nature and spend a lot of time observing all kinds of creatures in their natural habitats. Biological recording is a systematic way of keeping track of animals’ distribution. I like it, because it is possible to see where different animals live and go, as well as when and why they go there, and it’s nice to be able to contribute to this information.” 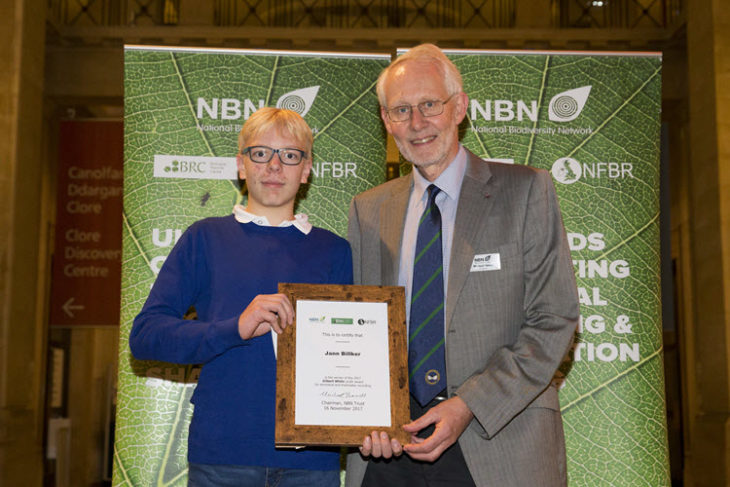 Liam Olds (from Rhondda Cynon Taf) is the winner of the inaugural Adult Newcomer Award for biological recording. He said:
“What particularly excites me about biological recording is the chance of discovering species previously unknown from my local area, regardless of whether these are common or rare species.

“What motives me to get involved is the general lack of appreciation for the South Wales valleys as ‘biologically interesting’ places. Through my biological recording I hope to highlight the incredible diversity of wildlife found in the valleys, dispelling the myth that there’s no wildlife in the valleys.” 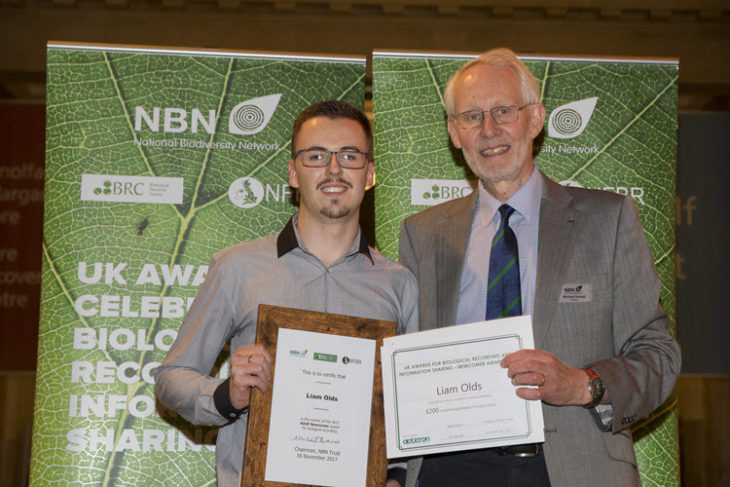 “What motivates us all is to increase local knowledge but also to spark the passion in people who may not have had it before. Whether it’s a young child buying a bat detector after attending one of our events and getting excited about bats or whether it’s someone attending one of our workshops and the next day finding a species that hadn’t been recorded in the area before, because of what they had learned.”

Download photo of Derek Whiteley and Roseanna Burton receiving the award on behalf of the Dearne Valley Landscape Partnership. 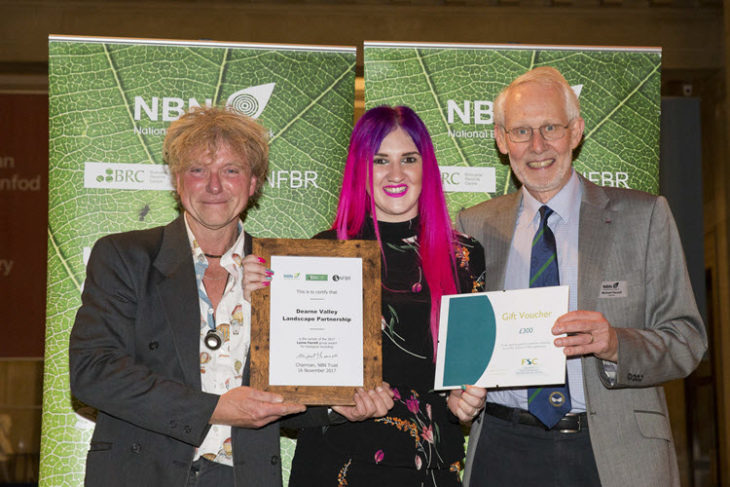 Professor Michael Hassell, Chairman of the National Biodiversity Network said:
“The painstaking work that individual and groups of biological recorders undertake over many years is all too often not publicly recognised. We wanted to correct that, and celebrate the outstanding contributions that British biological recorders have made to improving our understanding of wildlife in the UK.”

Seasearch is the winner of the 2017 John Sawyer NBN Open Data Award.

Download photo of representatives of Seasearch receiving their award. 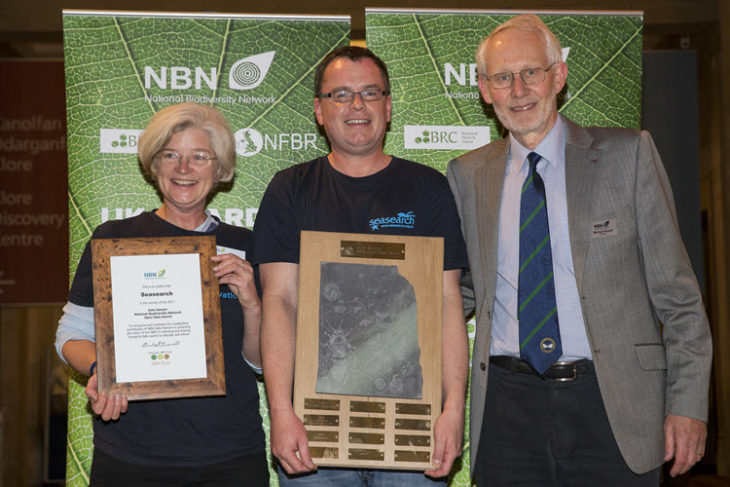 Group photo of the Award winners 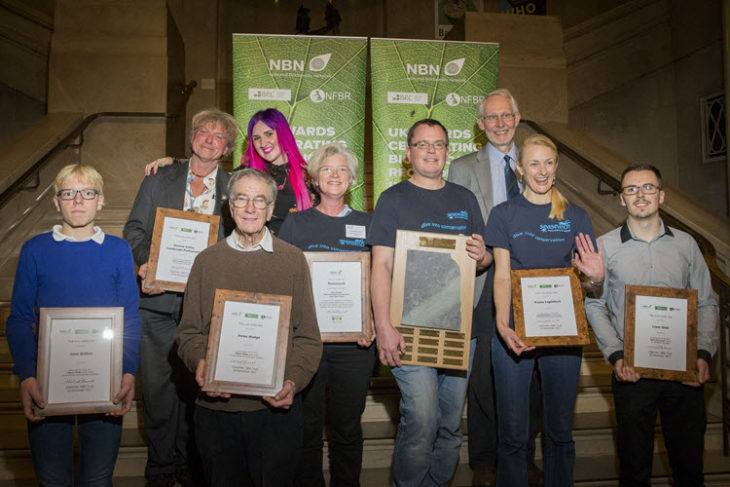