Bryophyte and lichen data has been used ‘To help assess spatial priorities for rhododendron control based on the distributions of selected lichen & bryophyte species’ as part of Scotland’s Rural Development Programme 2014-2020.

Rhododendrons are a non-native plant species to the UK. In 1763, rhododendron ponticum was introduced to the country as a cultivated flowering plant that was distributed into British estates, parks and private gardens. Rhododendrons have great negative impacts on the environment as they have destructive colonising abilities. When rhododendrons colonise, they reduce the biodiversity quality of the surrounding area and can deter woodland regeneration. Additionally rhododendrons are extremely challenging to control/eliminate which can be a very timely and costly process (Edwards 2006).

In regards to Scotland, the woodland of the western Highlands is one of the richest habitats for bryophytes and lichens to thrive in Europe. However, a threat of rhododendron overshadows lichen and bryophyte health as they produce an acidic leaf litter which can provide unliveable conditions for both lichens and bryophytes (Scottish Natural Heritage 2015).

The map produces a visual image to help assess spatial priorities for rhododendron control. The ‘score’ used on the map displays the number of species within hectads which can be useful when prioritising rhododendron control.  This enables managers to target the key areas to eliminate the negative impacts rhododendrons have on lichens and bryophytes. 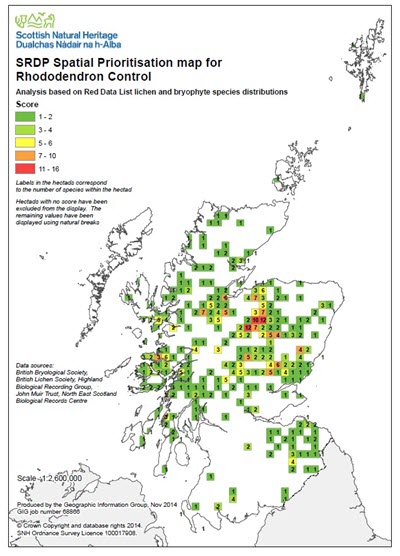 Scottish Natural Heritage, 2015. The Effects of Woodland Management on Bryophytes and Lichens in the Western Highlands, Information and Advisory Note Number 121. http://www.snh.org.uk/publications/on-line/advisorynotes/121/121.htm, Accessed 07/08/2015.