The winners of the 2016 UK Awards for Biological Recording and Information Sharing were announced at the National Museums Scotland, Edinburgh during an evening ceremony on Thursday 17th November 2016.

These awards have been developed by the National Biodiversity Network, the National Forum for Biological Recording and the Biological Records Centre. They run annually and their intention is to recognise and celebrate the outstanding contributions made by adults, young people and groups to biological recording, which is helping to improve our understanding of the UK’s wildlife.

Following its success in 2015, on Thursday 17th November 2016, we will again be holding an evening reception for the UK Awards for Biological Recording and Information Sharing.  This will be held at the National Museums Scotland between 6 and 7.15 PM.  Drinks and nibbles will be served during the event and there are a number of restaurants available locally for dining afterwards.

We are delighted that Swarovski Optik UK will once again be sponsoring these awards. We are also pleased to announce that Paramo will be involved with sponsorship this year too.

In 2016 there are five award categories which receive nominations:

There is also the John Sawyer NBN Open Data Award which is presented annually, by the NBN Trust, to a member of the NBN who is making the greatest contribution to open biodiversity data in the UK.

These are as follows:

George featured in the January 2017 issue of BBC Wildlife magazine in the My Agenda column.  Read George’s interview for My Agenda below. 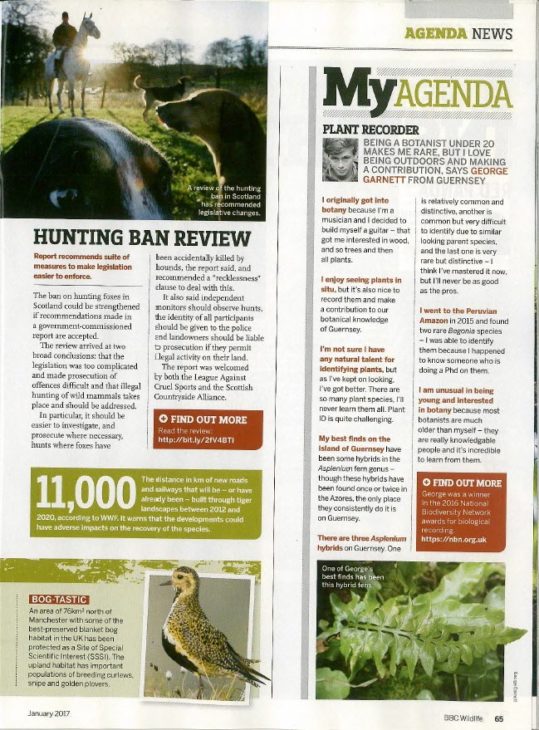 The Awards’ Committee wanted to recognise a further individual in the Gilbert White category for the work they are carrying out.

The River wardens featured in the February 2017 issue of BBC Wildlife magazine in the My Agenda column.  Read Mary Tayler’s interview for My Agenda below.

Response to the Awards

Professor Michael Hassell, Chairman of the National Biodiversity Network said:
“The painstaking work that individual and groups of biological recorders undertake over many years is all too often not publicly recognised.  We wanted to correct that, and celebrate the outstanding contributions that British biological recorders have made to improving our understanding of wildlife in the UK.”

Thank you to our sponsors

The Awards’ ceremony was kindly sponsored by Swarovski Optik UK.

The David Robertston marine and coastal awards were sponsored by Paramo Directional Clothing.

The Group Award was sponsored by The Field Studies Council