The winners of the first ever UK Awards for Biological Recording and Information Sharing were announced at the Merchant Taylor’s Hall in York during an evening ceremony on Thursday 19 November 2015.

These awards have been developed by the National Biodiversity Network, the National Forum for Biological Recording and the Biological Records Centre. They will run annually and their intention is to recognise and celebrate the outstanding contributions made by adults and young people to biological recording, which is helping to improve our understanding of the UK’s wildlife.  This year they were sponsored by Swarovski Optik UK.

There are four award categories:

These are as follows:

Due to the high standard of the nominees, the award committee also chose to give a runners up award to James Hammond.  James was unfortunately unable to attend the ceremony.

In 2015, the awards committee also chose to give:

Nic Jee accepted the award on his father’s behalf.

Professor Michael Hassell, Chairman of the National Biodiversity Network said:
“The painstaking work that individual and groups of biological recorders undertake over many years is all too often not publicly recognised.  We wanted to correct that, and celebrate the outstanding contributions that British biological recorders have made to improving our understanding of wildlife in the UK.”

The marine and coastal awards are sponsored by Cameras Underwater and by the One Stop Nature Shop. 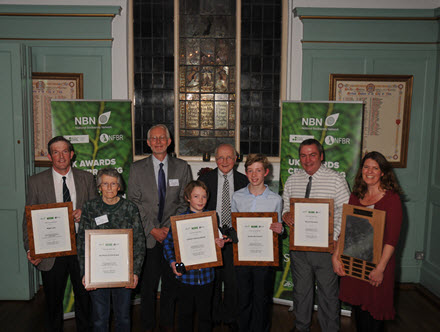