Releasing the Reptiles and Amphibians of World Museum

Like colleagues at natural history collections across the UK, the curatorial team at World Museum, National Museums Liverpool, is eager to contribute to global-level collections research that shapes action and policies addressing the global biodiversity crisis. The Global Biodiversity Information Facility (GBIF) is “an international network and research infrastructure funded by the world’s governments and aimed at providing anyone, anywhere, open access to data about all types of life on Earth”.

GBIF is the go-to place for researchers and policy-makers mapping changing species distributions, creating species lists for specific areas, and identifying holdings of species or taxonomic groups within natural history collections. For a collection to maximize its contribution to understanding and preserving biodiversity, basic data about its specimens (what, where, when) must be available on GBIF.

Because GBIF is an aggregator, not host, publishing data on GBIF requires data be initially hosted on a suitable platform. Larger institutions have their own hosting platforms, such as the Natural History Museum’s fantastic data portal, but smaller collections may not have equivalent resources and expertise. As a member of the UK’s National Biodiversity Network (NBN), World Museum has been contributing datasets to the NBN Atlas, a platform providing open-access biodiversity data for the UK. NBN is the UK node of GBIF and datasets on the NBN Atlas are routinely published on GBIF.

The NBN Atlas can also host global datasets for member organisations, allowing non-UK datasets a channel through to GBIF. Through this exciting partnership, the Vertebrate Zoology collection at World Museum has recently made its first steps onto GBIF by releasing our global Reptiles and Amphibians dataset.

The majority of specimens in the dataset are adult or juvenile whole organisms, preserved in Industrial Methylated Spirits (denatured ethanol). The dataset (2,021 occurrences) doesn’t include mounted taxidermy or dry osteology specimens which we plan to release later. A comprehensive catalogue of the collection was printed in 2004. 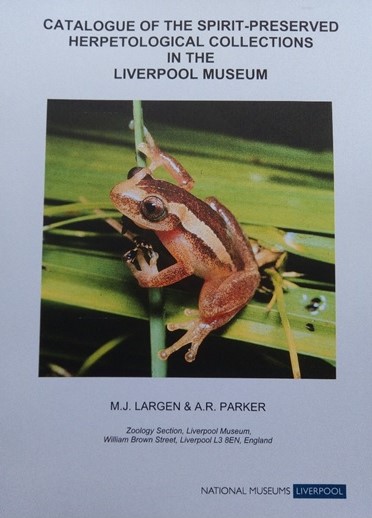 The oldest specimens likely date from the 1840s and were donated to the collection shortly after World Museum was founded (as the Derby Museum of the borough of Liverpool) in 1851. Important collections were obtained during the Liverpool Museums expeditions to Socotra, Yemen in 1898/99 and to Peninsular Malaysia in 1913/14. There are a number of snakes collected by controversial game warden CJP Ionides, known as “the Snake Man of British East Africa”, and JRF Mills, a ranger working in Uganda in the 1950s/60s. Specimens were purchased from the Liverpool Aquarium Company in 1960 following death in captivity, and others transferred from the Liverpool University Zoology Museum in 1999. Significant, relatively recent, additions are those of former curator, Malcolm Largen, who was an authority on African amphibians and made extensive collection in Ethiopia in the 1980s, as well as collections from Martin Pickersgill made in Southern and Eastern Africa in the 1990s.

It is very encouraging to see that the dataset has already generated substantial usage activity including whole dataset downloads, downloads based on searches for localities (e.g. China, Brazil, Madagascar) and downloads based on scientific names. Stay tuned for the release of World Museum’s birds and mammals.

As early springtime teased us with its capricious twists and turns, its warm sunshine and stinging hail, I supplemented my DIY induction to wildlife recording…

Written by Lisa Chilton, NBN Trust Chief Executive Officer Last month I explained why 2022 is the year that I’m going to throw myself back…

Written by Lisa Chilton, NBN Trust Chief Executive Officer My New Year’s resolution for 2022 is a cracker. Painless, enjoyable, and with results I can…