Do you know What Works in Conservation?

This week sees the launch of ‘What Works in Conservation 2017’, the latest, updated book from the Conservation Evidence project.

We all know that we need to do better in conservation – despite our best efforts, species and habitats are still disappearing at an alarming rate. But exactly what can we do to be more effective with the same limited resources? Pay attention to the evidence, says Professor Bill Sutherland, who set up Conservation Evidence in 2004 to try and find out exactly what works – and what doesn’t – in conservation.

The idea behind the Conservation Evidence project is so blindingly obvious that it begs the question ‘why haven’t we always done this?’ The project collects together all the evidence for every conservation intervention ever conceived, to see what actually works in conservation. The ambitious aim is to collate the evidence for interventions for every species and habitat in the world, to really get a handle on what produces solid results – and what is just wishful thinking. The project is ongoing, but topics covered so far include bees, birds, bats, amphibians, forests, sustainable aquaculture, soil fertility, natural pest control, freshwater invasives, and farmland conservation in Europe. The idea is that anyone can use the free website to read summaries of the scientific evidence on every intervention, and put their efforts towards what works, not what doesn’t.

In ‘What Works in Conservation’, experts (we still believe in them here) review the available scientific evidence and score every intervention for how effective it is, the certainty of the evidence and any unintended harmful side-effects. Each intervention is then assigned to a category from ‘beneficial’ to ‘likely to be ineffective or harmful’, with a corresponding colour code. This allows readers to instantly see what the evidence says about an intervention – or, indeed, whether there is any evidence at all. The aim is to add new chapters to the book every year or so as new topics are covered – the updated 2017 edition contains a new chapter on forests, as well as additional species added to a growing chapter on freshwater invasives.

The book represents a physical summary of the information available on the website, with URL links to guide readers to where they can find more in-depth information on a particular topic. It should sit on the desk of every conservationist, whether you’re a reserves manager, an ecological consultant, a scientific advisor or a policy lobbyist, as a reminder to check the evidence before committing yourself to a path of action. Not everything that is done for conservation is the optimal, best choice solution. Some things don’t work at all, yet have become the accepted approach for ‘how we do things’.

My personal favourite (an odd term for something that enrages me) is the bat bridge. First suggested in 2002 as a means to encourage bats to fly above traffic height on roads, reducing mortality, bat bridges or gantries were thrown up all over the UK before they’d been tested. When properly tested for effectiveness, it was seen that few if any bats actually flew along these structures, with most sticking to their original commuting routes through the traffic. While there are some more promising alternatives, such as underpasses and green bridges (that still need more testing and modification), bat bridges have become the accepted way to ‘mitigate’ against the effects of roads on bats. But they don’t work. Which is exactly why we need people to look at the evidence. 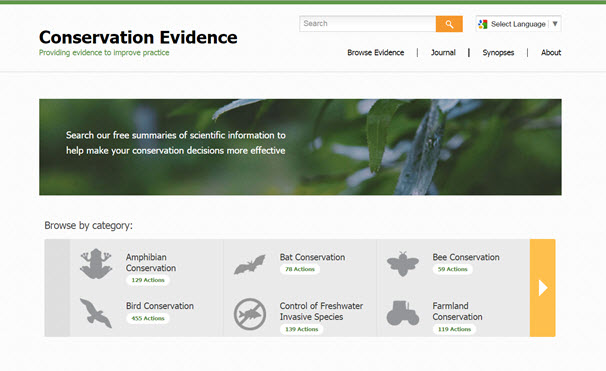 So if you’re in need of a New Year’s resolution for 2017, make it this; every time you make a decision about conservation management, check Conservation Evidence. There might be other, unpublished evidence you choose to look at as well. That’s fine. But if we are afraid for the fate of biodiversity in a world described as ‘post-truth’, we need to get our own house in order, and that means both using and critically appraising scientific evidence at every level. If we don’t want to fact-check what works in conservation, we may as well just make a load of unsubstantiated claims with no intention of verifying them. But that’s not what we want. Is it?

As early springtime teased us with its capricious twists and turns, its warm sunshine and stinging hail, I supplemented my DIY induction to wildlife recording…

Written by Lisa Chilton, NBN Trust Chief Executive Officer Last month I explained why 2022 is the year that I’m going to throw myself back…

Written by Lisa Chilton, NBN Trust Chief Executive Officer My New Year’s resolution for 2022 is a cracker. Painless, enjoyable, and with results I can…