The UK Species Inventory plays a crucial role in enabling species data to be managed and made available electronically throughout the NBN. The Inventory has three main purposes:

The UK Species Inventory is managed by the Natural History Museum, although much of the actual content is created and provided by others, generally the currently accepted experts in a taxonomic area. The Inventory also holds earlier checklists for taxonomic groups, derived from, for example, published taxonomic reviews.

The structure of the Inventory is quite complicated, but for most users it is not really necessary to understand the complexities. However, there is one important point to bear in mind: that there are three separate identification tabs (known as “keys”) in the Inventory that refer to a particular name. These are (using the identifiers that are employed in the Species Inventory system):

These have an identical structure (that is, they look very similar) so it is very important when recording a species against a key that the type of key is recorded.

The UK Species Inventory website summarises the operation and performs specific functions:
• It allows users to search for names of organisms by their common and scientific names, and through a hierarchical classification. Users can also search for individual lists and their contents.
• The database serves as an archive by presenting various versions and editions of a number of important checklists, thereby allowing the user to investigate how the names, or threat statuses, of taxa within particular groups of organisms have changed through time.
• The database also holds information concerning the legal designations and conservation status of protected species.
• The underlying database draws upon information held within Recorder 2002 and many other species checklists.
• The UK Species Inventory is incorporated within a number of other NBN products. In addition to Recorder, it forms part of the NBN Gateway and the now archived NBN Index.

One of the unavoidable problems with taxonomy is that different people will know the same species by different names. This can be as a result of valid changes in the taxonomy (for example through re-classification) or simply that one worker knows a species by a different name (for example its common name as opposed to its scientific one). However, it is critical to be able to translate between the various names and particularly, when reporting, to ensure that all the available details are being used regardless of the variation of the name that a particular worker used.

To deal with this problem the Natural History Museum has developed the following approach:

The Natural History Museum maintains a reporting arrangement on the current status of different taxonomic checklists, which can be referred to via the UK Species Inventory Project on its website. 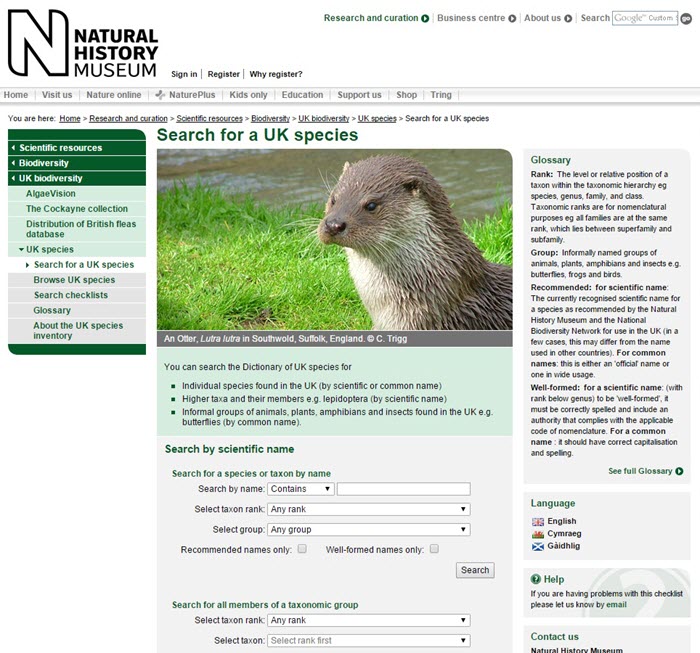