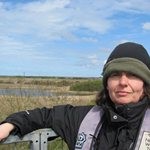 Role at the NBN Trust

To develop the NBN Membership and increase funding streams into the Network.

In February 2015 I joined the NBN Trust as Business Administrator while Sarah was on maternity leave, initially for a few months. Over the six years since then I have helped the charity grow and been fortunate to be involved with a great team and network of wonderful recorders and organisations.

I developed my love of nature over many years and am an active member of various local groups including Nottinghamshire Wildlife Trust City Local Group and Nottingham RSPB Local Group. Since 2020 I have been the lead organiser for the City Nature Challenge, Nottingham. I have recently become the talk of my neighbours as I turned my front garden into a wildlife garden with great success. Working at home allowed me to develop this with a mini pond, log pile, wildflowers in an old wheelbarrow and an array of visiting wildlife. All of which I can see from my home office window.

I have lived in Nottingham for many years since graduating from Nottingham Trent University. A few years ago, I was fortunate enough to take a year out to travel and have been lucky enough to see some fantastic wildlife from polar bears in the Arctic to elephants on the Zambezi. Despite several attempts I have yet to see the Northern Lights. However, it’s still exciting to see waxwings and hedgehogs a short distance from my front door!

Along the way I also seemed to get myself involved in the organising committee of a long-established local art week, sit on the Nottingham City Local Access Forum and take up mosaics as a hobby!

My working career up to 2014 was in the social housing sector. Choosing voluntary redundancy late in 2014 allowed me to refocus my career on my interests and use the skills and abilities I have gained to assist the NBN Trust and its ever-increasing network.